The objects and sounds are created by Zoon from MTM2.com.

-Never seen before objects in NR2003 (See Images), including the first UFO and other oddball objects such as secret tunnels and weird tubes that you’re meant to drive through.

-Already well mapped (There are no bits of transparent areas sticking out).
-Low Polygon count under the limit (MTMs might be much lower) this does not mean a reduction of quality. 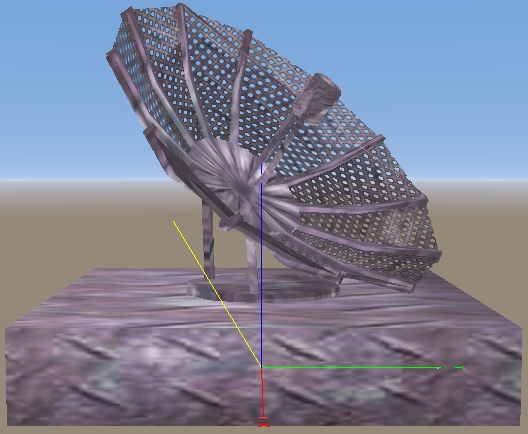 -2D objects; I have decided to work in 3D Sim Ed and is now included.

-I have not released the surface track textures as they are in hundreds of tiny 28x28 squares and if I do end up recreating a circuit from the game. It’s likely that I may use different ones. When enlarged they are in a low quality. This does not happen in the game itself.

-Some mips have the same file name, but should work if put in a track folder together without any issues. One file name black.mip is the same as in some other tracks. I think as long as the other file from a different track has this name, but is square and completely black, there should not be an issue if using these objects there (unless it’s a different colour) and vice-versa.

-Some of these have weird textures on them, feel free to re-map them, a few look like they could really use that.
Pathfinder

-Not indented to be a 100% realistic one and if it is too large, I could rescale it down but remember it is from a monster truck game, I think it’s meant to blend in and be big.
Object Textures

-Some have many mips that go on to one object. Right click and open the 3do in notepad to see what goes with what, or open 3D Sim Ed if you have it and look under editing materials. I have in fact included the material list order if that’s any use to 3-do-ers.
Reflective Track Light

-Yes, not animated yet but does have eight segments. There are many ways they could be animated if you know how to do that, for now they are static and not actually lit or reflective.
More Animations

-Yes, some objects do look a little still than they should be, but you can animate the mips if you know how to, for example all the towers do look as if they NEED to be pulsing but I do not know animation in sandbox yet. It is open to anyone to try on your own projects. Probably have sounds too.

-As for 3D objects that are animated other than flight paths, the reason why there are five radars is because it’s supposed to move into each of those positions and back, but I’m not too worried about that for now, they still look really good anyway.

I may include some of these objects in my Moon track update, but as you can probably see, I might not be so sure about some, but at least it is available to use.

Sounds
I have included .wav sound files ready to be used with objects extracted from the original track. To use these. You have to apply them to your object within the track you are working on; they do not work by just placing them in your sound folder.

I keep a folder named Track Add-on Sounds to keep track of each track sounds, then have a folder named All with all the add-on sounds so when I switch between different sounds, I could just copy and paste that into the current sound folder I am using.
A huge benefit of this is the sounds play constantly instead of just the start of a race (as long as you are driving or in replay, at live feed).
Let me know if sounds are working on your PC if using them, some sound/sound packs may or may not make all of these play but it is worth a shot.

I will release a full tutorial on how I did it in the future forum, under Tips Tutorials and How To, including a FREE 3D Sim Ed 3 to use (sorry if you have already purchased it).
-https://www.youtube.com/watch?v=oAXIP6as-Sc (Use To Get Free 3D SimEd (Search was 3D sim Ed Crack))